Christmas market, decorations and the large creche in the main church. It’s been a long while since I went to town, being busy with shows, sick Jordan, being sick myself, etc.

The town was beautifully decorated with ribbons, lights and the stands were fun to look at. All sorts of little nick knacks, jewelry, etc. What I thought was kind of neat was the way the fountains had been wrapped up, a different way to preserve them for the winter.

After a little snack, we made our way to the big central church as I had heard that there was a creche worth seeing. We weren’t disappointed. The set up was so cute with the large manger scene at the top of a little mound with all sorts of little scenes around, ranging from the shepherds watching their sheep, to the wise men travelling to see Jesus, to a little waterfall including a boat, to a farmer tilling his land and the star-filled sky.

On the way home, we were listening to some of my favorite songs on the MP3 player, it

was playing Angelic You, so Cherise asked me to skip it. Next, it’s ‘Mom, can you turn it up?’, then ‘here’s my hair elastic’…I’m wondering what it’s all about, so I look back to see that the four of them had created an ‘air’ band with Cherise drumming and moshing at the same time, CC was doing lead, Jordan guitar and Alen got to scream “Peace of Mind”….my kids…aren’t they just too cool?

With the New Year just ahead, I’ve been thinking about the areas of my life that need serious change. These quotes that I read yesterday helped put some areas into perspective…

I know you all remember 1 Corinthians 13, right? Those aren’t just Paul’s words; that wasn’t just his personal standard, or just true in his personal life. Those words came from Me. They are too beautiful and true and everlasting to just be Paul’s own idea. They were directly inspired by Me, because they show how I feel; they expose My heart and how I judge when it comes to accomplishments vs. love. It says that if you do all those things, but don’t have love, it profits you nothing. No profit = no good. Do you understand? That means that things done without love, or things accomplished at the cost of showing love and compassion and care for others, are unprofitable work—a waste of time, idle work, useless work, work no better in My eyes than the idle words you’ll have to give account for.

No profit means that it didn’t help you any. You might think that your haste and hurry and the lacks in your kindness and consideration of others will be justified in the end, but they won’t be. The end will not justify the means. You can rush through life “getting stuff done‚” but you will have failed if you don’t take time to care for others, to love them, to be Me for them, and to even delay the more important things you have to do in order to show those immediately around you that you care about them and their needs and that they matter to you.

I’m almost certain musical teddy bears were invented by the devil…and always given by people who don’t actually live with the kids. Ours nearly took a bath today–one of them is a dolphin anyway…(a pink dolphin that sings Mr. Jones, Mr. Jones!)

On Christmas Day, John and I spent a good 6 hrs in the kitchen stuffing 2 turkeys, making 3 extra trays of stuffing, potato salad, green salad, dressings and gravy…that time does not include breaks for lunch and power naps. By 10:00 I had a really bad headache coming on which has not gone away yet…could you pls pray for me? I’m resting a lot, etc…but I’d just like to be healthy again in time for New Years! Thanks!

I finally figured out how to imbed a video here. To start, we have Cherise reading the Christmas story to Jordan under the tree.

I’m sorry about the sound quality, but I think it’s cute anyway!

Oh, what fun it is to ride in a one-horse, open sleigh

you think he knows what’s inside? 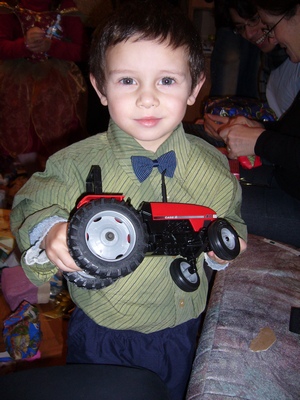 On Friday, we had our last big day of shows, three in one day! We started bright and early, but since we were early for the first show, I got some nice pix of the kids all dressed and looking nice, and there was a nice background…so enjoy. 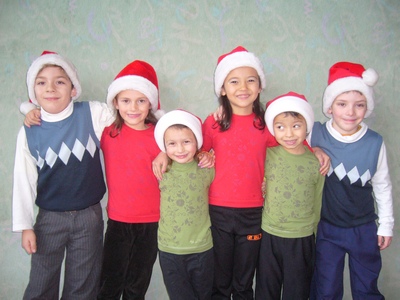 Charlotte ready for the performance 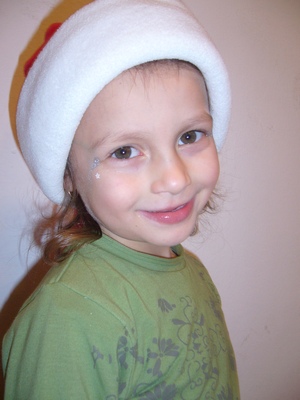 I like how both of them look so natural and relaxed in these ones.

Dashing through the snow…

Hope you all had a very Merry Christmas, that you enjoyed

friends and family, celebrated well, ate well and had a grand time! We had a great Christmas, starting on C-mas Eve with the pagent the kids put on for the home followed by Christmas stories, songs and lots of praise time! Oh, and warm wine…I got to make it for the second time this year, it’s so tasty, and goes so well with C-mas!

Thankfully, the kids slept in

nicely giving mommy a bit more rest before starting the busy day. After breakfast and some Word, we got together to open the pile of presents that had built up under the tree. We are a big home here, so it looks like a lot, ha! The cutest part was how all the kids had spent the last few days going through their things looking for items to make or give to the other kids and friends in the home. On Christmas Eve, CC came to me with several nice pieces of jewlery that she wanted to give to some of the girls in the home who take care of them a lot. My first reaction was a grimace, as they were pretty and semi precious…CC saw this and quoted me, “Mom, Christmas is the time of giving, and if I can’t give something nice, what else should I give?” She wrapped up all her little items, as did all the other kids with so much love and care, making sure that people knew it was from them. I thought that was so sweet, the true sprit of Christmas. We also played secret Santa or guardian Angel, whatever it’s called, which meant all the adults got special words from Jesus and a home made gift. That added to the fun!

Jordan was finally well enough to get out of bed on Christmas Eve,

and enjoyed opening his presents with everyone else. It was tough getting him to smile for pix, though, his metabolism is still a bit off, so he’s moody. Thankfully, he smiled for this one!

The week before he got sick, he decided he would really like a red tractor for Christmas. Considering he’s a fickle toddler, he kept with that wish, even when he was sick. Thankfully, I had already received a red tractor for him last month that I was saving for him from the very beginning. I thought it was so sweet of the Lord to supply the very desires of their hearts before I even knew what they were. Cherise had been wanting a doll for a long time, as she doesn’t have one, which was also under the tree for her. CC got a bunch of her heart’s desires, including pastels with a tray for mixing…she can’t wait to try that out, but I can, ha!