We’re so happy to have Jo’s mom for visit for a few days. None of the kids remember her as she had last visited 6 years ago when Cherise was a tiny baby. They are having a grand time catching up. Will try and get some pix.

Still need to post about Serbia, too. The pix are on the other drive, so I haven’t gotten around to editing them yet, gasp.

Been stocking up on these lately.

My shoulders are broad enough to carry any load–and the heavier the load, the stronger I am to bear it. My hands are skillful enough to take care of any task–and the more complex and difficult it is, the more My power is seen.

If you give up while you’re still climbing the mountain, you’ll never reach the top. Rocks along the way are not problems but footholds that will take you to new heights and victories.

Every change, is your ally. Changes can protect you from stagnation, from death on the vine. Changes will sweeten the wine that comes from the grapes of your life.

No, we haven’t dropped off the planet. Our internet connection has changed since coming back, we now have adsl, but the hitch is that only one computer can be on at a time (for now) but I’m having difficulty logging in on this site, so can only do it from the laptop which is what I’m using now to update pix and all. I’ll start with Cherise’s birthday party (the second one with cakes and bbq) and catch up on our trip in another post.

I had read on several blogs how people have had parties for their kids where the kids decorated cupcakes as part of the party. I thought it was a great idea, and the kids agreed! They came up with some pretty neat designs and had fun while they were at it.

They sure made their weeks amount of sugar though!

We’re off for a week to Serbia with the kids. Will see if I have internet access there or not, but will surely take pix and update when I get back.

On May 1, we were able to visit with a very good friend of ours who’s father had birthday. It was an interesting experience for the kids as well as this man collects all sorts of old tools, appliances and even has a big weapon collection. He’s a bit lonely because his wife passed away earlier this year, so asked specifically for us to visit with the kids. They did a fine job of cheering him up, performed their dance and just generally showed an interest in him which is what he needed most. 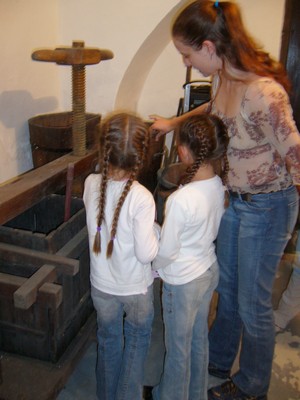 Here I am explaining the different tools and vats used to make wine. He has a cellar where he gets together with friends and has a collection of vats and other wine making tools. 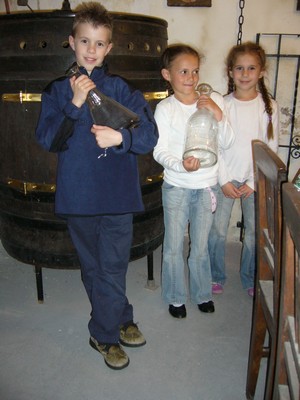 Next to a big vat that this man made into a shelf. The kids were given these wine jugs to hold…just for fun…
Other things in his collection ranged from ancient irons and typewriters, phones, radios and even a horse buggy.

The two little trouble bugs sliding down what isn’t really a slide, but they had fun anyway. Our friend said she never knew they had a slide on their house…that’s cause they never had our boys there before, heh. Of course, they got Cherise to go along with them. 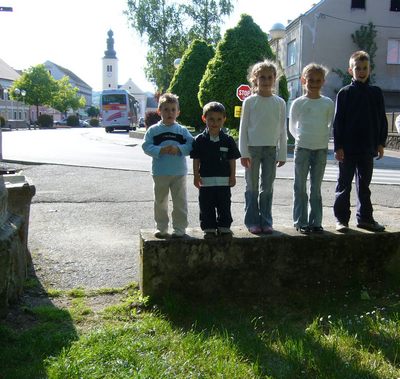 We took a walk around the village where they live. There’s an old palace which is being restored by a computer company. Here they are at the entrance to the park area surrounding the palace. 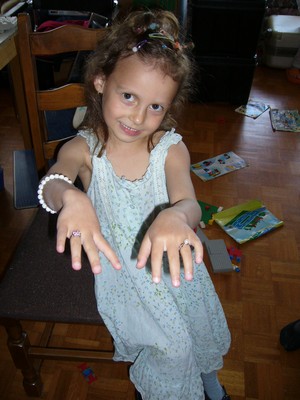 Cherise all dolled up by CC…playing hair dresser is the new ‘thing’.

I got out and cleaned the trunks in order to start packing and organising what we’ll take and what we’ll leave behind. Jordan of course, thought it made a great play house…

We were hired to do a birthday party for friends in CK. The kids came along too, of course, and had a great time.

We were also invited last Wednesday to participate in an EU awareness week that is being done in all major cities in Croatia. We were just there to face paint, though, and thankfully didn’t have to promote the EU or anything like that.

Yes, it is really warm enough for the kids to try out the pool for the first time. And yes, they couldn’t stay in too long as the water was still a bit cold; Jordan’s lips turned purple after 10 min and had to warm up. This is on Cherise’s birthday.

She’s adorable, sweet, lovable, cute, tender-hearted, spirited, bold, shy, strong-willed, loving, pretty and so much more. I love to see her smile in the morning as she happily greets a new day. Teaching her is a challenge, as she’s often one step ahead and learns very fast. She’s helpful with Jordan especially if it includes reading him stories. In general, a tidy child with a knack for attempting the most difficult tasks such as making her own bed in the morning. A saying here in Croatia says that a child born with six fingers has a sixth sight and will grow up to be a prophet or have other gifts. Cherise sure seems to sense things and is very intuitive to people’s feelings or what others are going through.

There is really so much more I could say about Cherise, but words fail me. Every day, I thank the Lord for bringing this angel into my life.

CC gave Cherise her present first thing this morning, and no, it’s not the cat, it’s the clips…

Here you can see it better.

The birthday kids. We’re having the ‘party’ on Sunday, but they got their presents today. The kids and I got Jo a belt and you’ll see Cherise’s in the pix that follow. 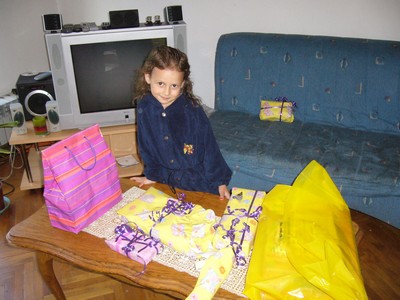 You’d think it was Jordan’s birthday…with all that yellow, heh! 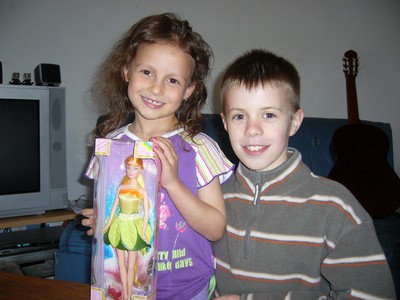 The outfit is from Joy.

I know I say this often, but may this year be the best one yet! May the Lord grant you the desires of your heart and I’m praying for you. Lots of love and kisses on your birthday from all of us.

Sunday morning, Cherise and I were cuddling as we like to do on these ‘lazy mornings’. She had her hand against mine and we were talking about how much she still has to grow before she’s as big as I am. Her fingers, hands, arms, etc. As we were comparing arms, she said that she also needed to be less skinny if she’s going to be as big as me, especially in her arms and legs. I said something to the effect of being careful that she doesn’t get a fat butt like mine, to which she replied, “It’s not fat, Mom, it’s just BIG!” Oh, now I feel so much better, snicker.

CC has shown a slight interest in writing and though she’s still just getting started, I wanted to encourage her by giving her an outlet to share some of it. So I’ll post her stuff here in pink. Do let her know what you think.

I Love the Night

I love the night when the stars up high

And when the moon is bright.

The birds sing me a song,

The frogs are singing along.

It sounds so pretty

And that is when Jesus talks to me.

He tells me things that I never knew.

This is why I love the night.

The weather was just too nice to stay home on Sunday, so we all went to Jarun, a great park with a lake, huge play areas for the kids, roller blading opportunities, etc. I’ll let the pix speak for themselves. 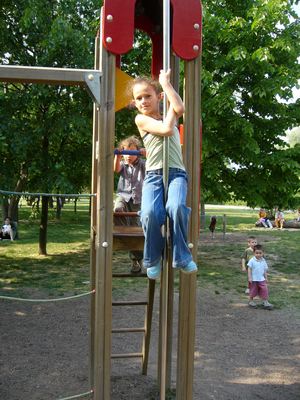 I like how this one caught the little ‘partners in crime’ in the background.

It takes faith, yes. It takes courage; it takes daring to trust Me. It takes the “God factor”—putting your trust wholly and completely in Me, claiming My Word, and expecting Me to do miracles, to do what you cannot do. It takes ignoring possible consequences when the doubters say‚ “No‚ no, no, it can’t be done.” It takes taking a stand.